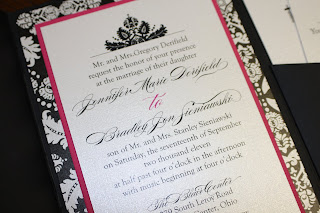 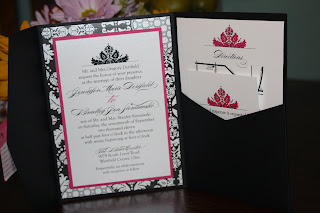 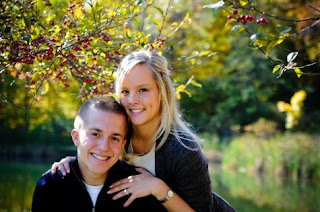 Jenn and Brad are an awesome couple who are going to be married on September 17th of this year. They had been dating 4.5 years at the time of their engagement.

Here is their engagement story as told by Jenn:

After dating for 4 1/2 years people start asking the question "So, when are you two going to get married?" "Are you guys making any future plans?" "How long have you guys been dating?" We had truly heard the phone book of questions from family and friends as the time we dated got longer and longer. I always replied with I don't know it's not up to me you'll have to ask Brad. In case they didn't ask Brad, I would causally say, "So hunny, when ARE we getting married?" Truth be told anyone who knows Brad and I, know that we are both planners, so these types of questions weren't of any surprise to us with each year passing. Unknown to me, planning was what Brad acutally started doing. He bought a house, restored it, and moved in. Naturally, I was excited with the path that we were going down as a couple. I thought it was time for the ring to come...But, reluctantly Brad made it clear that it was not yet the time. Until the day before my birthday, July 17th, 2010.


Saturday was a routine day for me, I went shopping with my mom and sister in the morning and early afternoon as the girls in my family normally do. That night, Brad and I made plans to go to dinner at one of my favorite restaurants at Crocker Park because my birthday was the next day. So, Brad picked me up we and we went to dinner as any Saturday night date usually went. Brad was as normal as ever, especially after Friday night when he was acting so strange. Tonight he acted like nothing was different, he was acting like himself. Unfortunately, it seemed as soon as we entered the restaurant, the night couldn't have gone any worse. We had a few problems during dinner, our food came out wrong, Brad left his credit card at the restaurant, then we went to get frozen yogurt trying to salvage what was left of the night with a nice dessert but wouldn't you know, it was spoiled. As if things couldn't have gotten any worse, Brad points out that his shirt is ripped in the sleeve so frustrated, he says we have to go home so he can change it. I thought, "Oh Gee," this is such a great night what else can go wrong? I admit it, we were having a rough night, but I started thinking its 7:30 and this is supposed to be a birthday celebration and you just want to go home? I was pretty bummed for both of us. In the meantime, I had talked about hanging out with my friend Jenny since she was in town and I hadn't seen her for a few months. So then I start asking Brad, can Jenny come over or can we meet her somewhere and celebrate? Still frustrated at how the night was going, Brad kind of brushed my questions off and didn' really say much on the way home. We finally get home and Brad suggests that we should go buy or rent a movie and try to salvage the rest of the night...and Jenny can maybe come over and hang out as well. I thought there is no way Brad is proposing tonight, this has been a tough night for both of us and we go upstairs to watch TV. I continue texting Jenny to try and make plans with Brad. Brad finally comes upstairs and I ask him if we can have Jenny over or do SOMETHING for the rest of the night. Brad kept avoiding my questions and took his phone out acting like he was texting somebody as well. A little time went by and I finally ask him, Hun, Jenny is texting me, what do you want me to tell her? Without a hitch, I get another text message, thinking it was from Jenny, I look at my phone and realize it was from Brad. The text read, "Tell her...I'm Engaged!", it took me a minute to even realize what just happened but before I knew it Brad was down on one knee proposing to me! I was so shocked, surprised, and shaking! I said "Yes, of course!" and then after a few minutes I said wait I didn't even look at the ring!
I thought for sure I would have definitely known when Brad was going to propose but I had no idea! I was SO SHOCKED! It was perfect.

The next part was so much fun as we had to tell our families! We went and told his parents first because they lived closest to his house. I thought that the minute they saw me they were going to know because I felt like I had the biggest smile on my face! We walked into Mr. and Mrs. Sieniawski's house while trying to hide the ring. Brad's niece Emma happened to be over at the time so we said Emma come upstairs we have a surprise for you. Brad then bribes her to go downstairs and tell Nana (Brad's mom) that, "Jenn got a ring." We all return back downstairs and ask Emma if she had something to tell Nana? Without a hitch, Emma goes "Nana, Jenn got a ring!"

I wish we had a video camera for the next part as this could have been the next $100,000 winner to America's Funniest Home Videos...It took Brad's mom a minute to realize what Emma had said, she even mouthed out the words in the air trying to figure out their meaning as she then shouted, "Jenn...GOT A RING!"...It was absolutely priceless and so much fun to finally tell everyone we were engaged!

I have to say, Brad has always had trouble keeping secrets from me. Be it birthday gifts he was excited to get me, little things he was doing for another person, or anything else. Truly this has been a wondreful aspect of our relationship because we can confide in each other and tell one another anything, but I always thought that I would be able to know when he was going to propose. I can honestly say that he got me...I couldn't stop shaking and smiling the entire night...What a perfect time.

We have lots of items available for custom printed favors and accessories: IMPRINT-ME WEDDING SWAG

Can't make it to our store? Shop our quick site.
SHOP ONLINE INVITATIONS

Promotional Products for your business or event! From pens to mugs or coozies! IMPRINT-ME Need personal Service? Contact Us